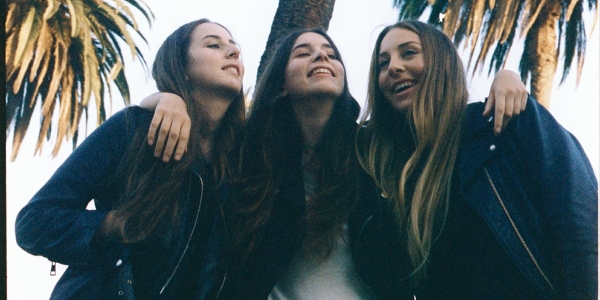 In their incredible rise to fame, girl group Haim are going on a seven-date UK and Ireland tour at the end of the year. The tour is to promote their “Days Are Gone” début album, out the end of September. Haim tickets are available now.

The Haim tour will start on the 4th December at the UEA in Norwich before heading to Birmingham, Leeds, Manchester, London, Glasgow and finally Dublin.

Haim was just formed in 2012, it is quite amazing to say that the band of the three sisters Danielle, Este and Alana have already performed at Glastonbury, Reading and Leeds and picked up a worldwide following since originating from America.

Haim are due to release their début album on the 30th September which is already attracting a lot of attention, thanks to the other artists the group have worked with and the tours they have completed, both solo and supporting other big names such as Mumford and Sons and Florence and the Machine.

The group of three sisters have been playing music together throughout their childhood so it’s only natural that they would go on into the music industry together. Their music genre is quite difficult to place, with them playing at traditionally rock festival, Reading and Leeds whilst also being compared to Fleetwood Mac, but also being influenced by Destiny’s Child and TLC of the 90’s. One of the things that draws fans to Haim is the fact that all three of the sisters are able to play multiple instruments, displaying their wide range of musical talent. This is incorporated into their music and live performances, especially on fan favourite “Fallen” where they all play drums and harmonise together.

Having been awarded the BBC Sound of 2013 award, and with tickets available from 30th August, this is a band that you’ll definitely want to see if you have not already had the chance to, thanks to their many festival performances over the summer.

Get your Haim tickets now and see the three sisters with their first ever Haim tour throughout the UK and Ireland from the 4th December to 13th December. Pre-Sale will start on Wednesday, 28th August and general on-sale will be Friday, 30th August.