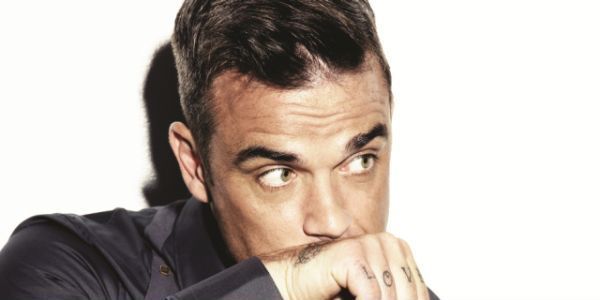 06.12.2013. After his recent one off performance at the London Palladium, Robbie Williams announced his new “Swing Both Ways” Tour for June 2014. The tour includes 13 concerts in the UK.

The “Swing Both Ways” Tour will start at the Odyssey Arena in Belfast on June 13th and include 3 performances at the Phones4U Arena in Manchester and conclude with 3 gigs at the O2 in London. Other stops include Leeds, Glasgow and Birmingham. The Tour will see Robbie also visit Hungary, Austria, Italy, Netherlands, Germany, Denmark, Norway, Sweden, Finland and Switzerland.

“Swing Both Ways” became the 1000th number one album in the UK and sold 109,000 copies in the first week. It is Williams’ 11th Official UK Albums Chart #1. Williams released the video to his new single “Dream a Little Dream” which features his long-time collaborator Guy Chambers. The new album also features covers and original material as well as duets with Michael Buble, Olly Murs, Rufus Wainright, Lily Allen and Kelly Clarkson.

Robbie Williams – One Night at The Palladium 2013

29.10.2013 Robbie Williams is back with a one off performance at London’s Palladium. Williams will be joined by Lily Allen and Rufus Wainwright at the November 8thgig. Tickets are on-sale now.

Robbie Williams will play a special performance gig at the intimate Palladium in London on November 8th. He is joined by Lily Allen and Rufus Wainwright as well as Miss Piggy and Kermit the Frog from the Muppets.

Robbie Williams reached number one last year after releasing his album “Take the Crown”. Now, he is about to release his new material which features artist like Lily Allen, Michael Buble, Olly Murs and Rufus Wainwright as well as Miss Piggy and Kermit the Frog from the Muppets.

The new “Swing Both Ways” album is supposed to be released on November 17th and is a move back to his swing style.

Lily Allen will also return to the stage for the first time in years after having a baby and taking a break from music. The pair recorded a “Dream A Little Dream” together for Robbie Williams’s new album.

Get your Robbie Williams Tickets now for the intimate gig at the Palladium in London. Robbie Williams tickets are available now. The gig is also filmed by the BBC One, but you can be there in person and witness a truly unique Robbie Williams concert.

The entertainer, Robbie Williams is back and he wants to make pop history with his ninth album “Take the Crown.” He already thrilled the audience with his classics such as “Let Me Entertain You” and “Rock DJ” first comeback concert on November 22nd, 2012 at the O2 Arena. The new single “Candy” is already on top of the UK Single Charts for the first time in eight years. “I wanted to come back with a massive solo album,” said Robbie about his forthcoming release. “Candy” is a summer song about a girl who thinks she’s great. And she might be, but she’s a bit nefarious with her ways.

The former boy band singer currently lives in Los Angeles and his personal life has certainly calmed down over the last years. He got married in 2010 to the Turkish American actress Ayda Field and welcomed baby daughter Theodora Rose on September 18th 2012. He also reunited with his former boy band Take That.

The Robbie Williams 17 date European stadium tour will start on June 19th 2013 in Manchester. Olly Murs will accompany Robbie Williams on his Tour in the UK. Olly Murs recently released his new number one single “Troublemaker.” Robbie William said: “It’s legacy time. The album’s called Take The Crown and I want to seal my place in pop history and deliver a tour of great magnitude while I still can. I’m very excited. I’ve been lethargic for the last couple of albums and it didn’t look like I was bothered — but I am really bothered now. Olly Murs added that he was “a great honour” to be part of the Robbie Williams Tour in 2013.

The Tour will be huge and Robbie Williams fans can expect one of the most of exciting tours in 2013.