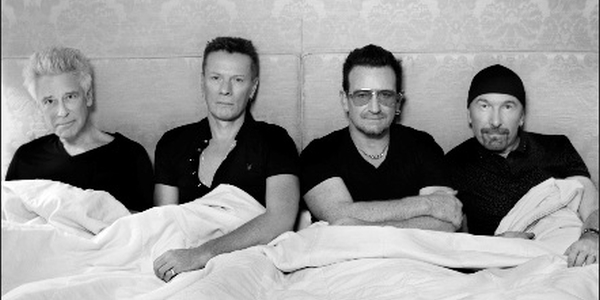 03.12.2014 – U2 announced their iNNOCENCE + eXPERIENCE Tour for October 2015. It will be the first arena tour in a decade and the band will perform 6 concerts in London and Glasgow. U2 tickets will go on-sale on Monday, October 8th at 9am.

One of the biggest bands is back in the UK. U2 announced their first arena tour in a decade and will have a four-night residency at The O2 in London (October 25th – 30th) and two nights at the SSE Hydro in Glasgow (November 6th – 7th). The UK leg is part of a wider European tour with additional stops in Paris, Amsterdam, Barcelona and Cologne.

U2 released their new album “Songs of Innocence” on October 13th. However, other artists heavily criticized U2 after giving their album to over 500,000 iTunes users for free. The album includes tracks such as “Ordinary Love” and “Invisible“. Nevertheless, U2 is one of the biggest rock bands in the world with 13 studio albums and 22 Grammys. Rolling Stone even labelled U2 as THE biggest band in the world.

For the 2015 tour, U2 intends to surprise their fans. Bono said: “We are going to try to have a completely different feeling from night one to night two and have some fun playing with the idea of innocence and experience. More to be revealed!”

U2 tickets go on-sale on Monday, December 8th at 9am. U2 ticket prices range from £30 all the way up to £165. Platinum and Travel Packages are also available.