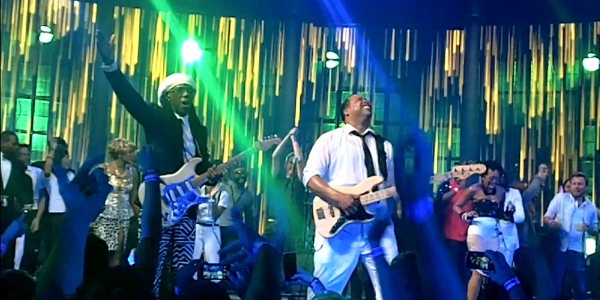 Chic featuring Nile Rogers continued their fascinating comeback and performed an unbelievable gig at the Roundhouse in London as part of the iTunes Festival on September 14th 2013.

The Roundhouse was completely sold out and the crowd was only waiting for one – Nile Rodgers. Nile Rodgers is probably the most unknown genius in the music industry. Most people properly got to know his name after his collaboration with Daft Punk on their new album “Random Access Memories” where he co-wrote and played three songs, including the number one single “Get Lucky.”

Chic and Nile Rodgers already performed in front of 70,000 people at the Glastonbury Festival 2013, where there were one of the highlights of the year! Following the festivals, fans have been waiting for a Chic featuring Nile Rodgers tour announcement, however, nothing official has been announced so far.

The iTunes Festival gig at the intimate Roundhouse was the first Chic and Nile Rodgers concert in London in years and fans couldn’t wait. Everyone was standing when Nile Rogers came on stage and started to perform. The track list included Chic songs such as “Everybody Dance“, “Le Freak“, “and “Good Times”, but also songs from Nile Rodgers’ extensive list of songs such as “Upside Down” and “I’m Coming Out.”

Nile Rodgers is probably the most unknown genius in the music industry. He was part of Chic from 1976 to 1983 and then worked mainly as writer and producer. Since, he wrote songs for some of the biggest artists such as Madonna, Diana Ross, David Bowie and Duran Duran.

For me personally, it was one of the best concerts I have ever been to. The energy in the Roundhouse was truly amazing with literally everyone in the crowd was singing along, cheering and jumping. If you have a chance to see Chic and Nile Rodgers, I can only recommend seeing them live!