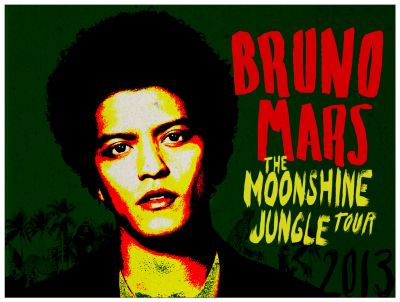 Bruno Mars is taking his huge album hit “Unorthodox Jukebox” on the “Moonshine Jungle World Tour”. The UK leg of the tour will start in Manchester on October 5th and will stop in Glasgow, London, Birmingham and Sheffield.

Hawaiian-born singer, song writer and music producer released his second album “Unorthodox Jukebox” in December 2012 and his lead single “Locked Out of Heaven” was a commercial success, topping the US Billboard Hot 100 for six consecutive weeks. “When I Was Your Man” is the latest single release from Bruno Mars.

His “Moonshine Jungle World Tour” will certainly electrify fans around the world with his reggae- and Motown-inspired sounds. The “Unorthodox Jukebox” album is a mix for everyone and old tunes such as “Grenade” “Just the Way You Are” will surely be part of the tour as well. Bruno Mars creates upbeat songs captivating audiences across the world – secure your tickets now!