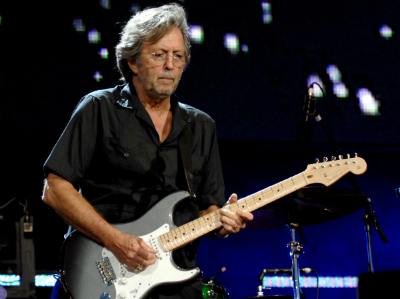 The rock and guitar legend Eric Clapton aka Slowhand will be back in the UK in 2013 to celebrate his 50th anniversary in the music industry with concerts in Belfast, Birmingham, Manchester and London.

Clapton is currently on a studio break in order to finish his new album that is scheduled for release in early 2013 prior to the tour. His UK Tour will begin on May 10th in Belfast with stops in Birmingham, Manchester and finishes with 7 concerts at the Royal Albert Hall in London. Eric Clapton will be accompanied by his longtime friends’ guitarist Doyle Bramhall II, drummer Steve Jordan, pianist Chris Stainton and bassist Willie Weeks alongside newcomers Paul Carrack and Greg Leisz.

Eric Clapton started his career in 1963 as a singer of numerous bands such as the Yardbirds, John Mayall & the Bluesbreakers  and Cream. Clapton joined the Yardbirds in 1963, a blues influenced rock and roll band, and stayed with them until 1965. Their first major hit was “For Your Love.” In 1995, he joined John Mayall & the Bluesbreakers only to quit a couple months later. However, he joined Cream in 1966 and established his legendary guitar solos. Since then, he was considered one of the world’s best guitarists of all time. He received several Grammys and is a member of the “Rock and Roll Hall of Fame”. Clapton was also successful as a solo artist and his albums “461 Ocean Boulevard” (1974), “Just One Night” (1980) and “Behind the Sun” (1985).

The 2013 UK Tour is a must for any rock fan and classics such as “Tears in Heaven” and “Layla” will certainly be part of the tour as well as legendary guitar solos and Eric Clapton’s new material.