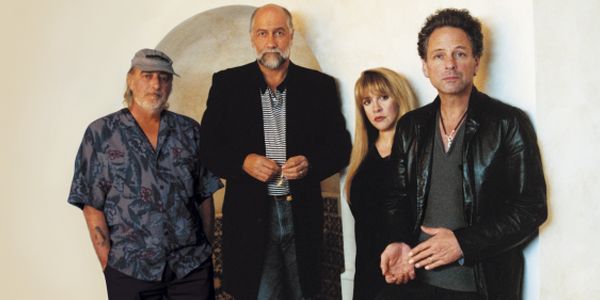 19.11.2014 – Fleetwood Mac is back! Mick Fleetwood and his band announced their On With The Show Tour 2015. The band will be joined by Christine McVie for the first time in 16 years. The UK leg will kick-off on May 27th at the O2 Arena in London followed by gigs in Birmingham, Manchester, Glasgow, Dublin and Leeds. Fleetwood Mac tickets are available now.

One of the most successful rock bands in the world is back in the UK. Fleetwood Mac will kick-off their On With The Show Tour with two gigs at the O2 Arena in London on May 27th and 28th before performing in Birmingham (May 8th /9th), Manchester (May 12th), Glasgow (May 16th/17th), Dublin (May 20th), London (May 22nd/24th) and Leeds (May 30th). The band is joined by Christine McVie, for the first time in 16 years. Christine McVie left the band in 1998 due to a phobia about flying. Demand for Fleetwood Mac tickets will be huge, so fans are advised to secure their tickets early.

Stevie Nicks, Mick Fleetwood, John McVie and Lindsey Buckingham are currently touring the US with their “On With The Show” tour and playing over 70 concerts before coming to the UK. Recently, Mike Fleetwood also ruled out any headline appearance at Glastonbury Festival next year.

Fleetwood Mac is one of the most successful rock bands in the music history with over 100 million sold albums. Hit singles like “Hold Me”, “Gypsy”, and “Love in Store”. The band also belongs to the Rock and Roll Hall of Fame. Get your Fleetwood Mac tickets now.

03.04.2013 – The legendary British rockers are back and announced 6 UK dates following the re-release of their iconic “Rumours” album and will stop in London, Birmingham, Manchester and Glasgow.

As the way of the music industry goes, and when the genre Rock is mentioned you cannot help but think of Fleetwood Mac. The London, UK originated band has produced some major singles such as “Go your own way” and “Everywhere”.

Fleetwood Mac’s most recent album released is their 35th anniversary album “Rumours” that has been rereleased as a deluxe edition. The re-released album entered the UK charts instantly and took the number 3 spot. Before the release of “Rumours”, “Say you will” was their seventeenth studio album, released in 2003 that has an estimation of around 100,000 albums sales in the UK and an estimated 500,000 in the USA. It also held the position of 6th within the UK Albums chart and 3rd in the US Billboard 200 chart.

While most bands underwent a number of changes over the course of their careers, few groups experienced such radical changes as Fleetwood Mac. Initially conceived as a hard-edged British blues combo in the late ’60s, the band gradually evolved into a polished pop/rock act over the course of a decade. The dramatic changes within the band include a transition of 16 overall members and also that excludes 13 touring musicians that have also come in and gone out. Throughout time Fleetwood Mac have laid to rest 3 of their former members including Bob Brunning, Bob Weston and Bob Welch.

Fleetwood Mac, one of rock’s most enduring, beloved and successful bands will be embarking on an ultimate world tour in 2013 including destinations in America, Canada and 16 venues within Europe. Some of the more extravagant venues include Madison Square Garden US, O2 Arena London and the O2 World Berlin. Rumors have been circulating around the 2013 World tour as speculation arises regarding new singles being performed during the tour.