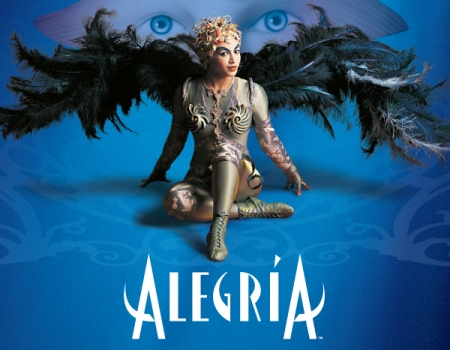 The Cirque Du Soleil performance “Alegría” will be coming to London’s O2 Arena and Wembley Arena as well as touring the rest of the country from July to November 2013.

Cirque Du Soleil has been described as a dramatic mix of circus arts and street entertainment and with tickets costing around £50 meaning it can be an affordable and entertaining day out. Alegría has very positive reviews with it being called awe inspiring and “a night of adventure, joy and peerless beauty.” Premiering in April 1994, Alegría is one of Cirque Du Soleil’s most popular performances.

While there are many themes within the show, some of the predominant ones are that of power and the handing of power down and the progression from ancient monarchies to modern democracies, using “gravity-defying acrobatics”. Using musical influences from France, Spain, Africa and the Mediterranean cultures, you get to experience a range of different sounds and compositions. The performances of Cirque Du Soleil Alegría, include the graceful manipulation dance as well as the exciting fire knife dance showing the mix of danger and elegance can work very well together.

The Alegría show has proved to be very popular with it being performed over 5,000 times and being viewed by over 10 million spectators in 65 cities around the world. All of the acts within the show have promise of being captivating and a worthwhile experience for someone looking for something different to do over the summer time.

Tickets are on sale now. Get your tickets now for one of the most spectacular shows in 2013!