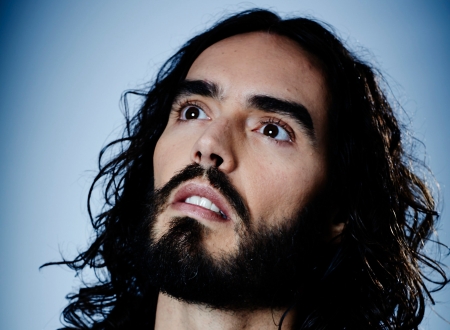 Russell Brand – the controversial actor and comedian is finally be back to the UK with his Messiah Complex World Tour and play 21 gigs in venues across England.

A Messiah Complex is an illness where the sufferer believes he might be the messiah. Did Jesus have that? How about Che Guevara, Malcom X, Gandhi or even Hitler? Russell Brand’s new Messiah Complex World Tour will look at the importance of heroes in this age of atheistic disposability.

Russell Brand is one of the most celebrated, controversial and criticized actors and stand up comedian in Britain. Now, Russell will take on the world with his new Messiah Complex World Tour covering figures including Che Guevara, Malcolm X, Mahatma Gandhi and Jesus. The UK leg will start on October 7th at Symphony Hall in Birmingham.

Russell Brand’s big breakthrough came in 2004 when he hosted Big Brother’s Big Mouth, a Big Brother spin-off. Since, he electrified fans and played in films such as Forgetting Sarah Marshall, Get Him to the Greek and Despicable Me. His last stand-up tour was in 2007 which was called  Russell Brand: Only Joking.

Today, Russell Brand is known around the world – whether it is for his failed marriage with Katy Perry, his drug addiction or his acting and stand-up talent. He is always pushing the boundaries beyond what is both politically and culturally acceptable. The Messiah Complex will be a treat for any stand-up comedian fan and demand for tickets will be huge. The charming and well spoken Brand will certainly attract thousand of UK fans. Get your tickets now: