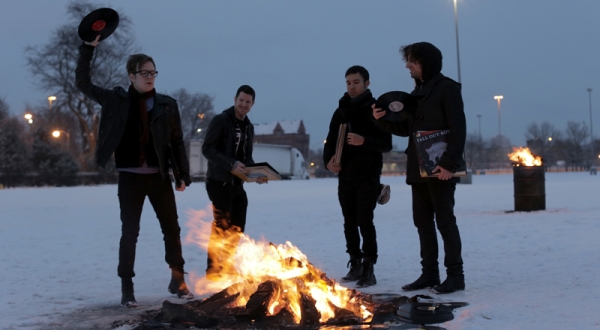 Fall Out Boy is back with their new album „Save Rock And Roll” and announced their “Save Rock and Roll” Tour in March 2014 with seven gigs in the UK.

Fall Out Boy will go on Tour with their new material. The Fall Out Boy tour will start on March 15th at the Motorpoint Arena in Cardiff followed by Birmingham (March 16th), Manchester (March 17th), London (March 20th), Newcastle (March 21st) and Glasgow (March 22nd).

The new album „Save Rock And Roll” was released in April 2013 and marks Fall Out Boy’s impressive comeback after a four year break. The lead single, “My Songs Know What You Did in the Dark (Light Em Up)” went straight to number two in the iTunes charts. Other songs on the album include “The Phoenix” and “Alone Together. “

Fall Out Boy started at the beginning of 2000 and includes Patrick Stump (Vocals, Guitar), Pete Wentz (Bass), Joe Trohman (Guitar) and Andy Hurley (Brums). The band from Chicago shot to international fame with their third album “From Under The Cork Tree“ and singles such as “Sugar, We’re Goin Down“, “Dance, Dance“ and “Infinity On High.”

The band announced an indefinite hiatus in late 2009 to work on side projects. However, now they are back and there new material, new album and new tour. It is one of the most anticipated comebacks of the year. Secure your Fall Out Boy tickets now and see one of the best punk bands in the world. Fall Out Boy tickets available now!

Tags: Alone Together, Dance Dance, Fall Out Boy, From Under The Cork Tree, Infinity On High, My Songs Know What You Did in the Dark (Light Em Up), Save Rock And Roll, Sugar We’re Goin Down, The Phoenix