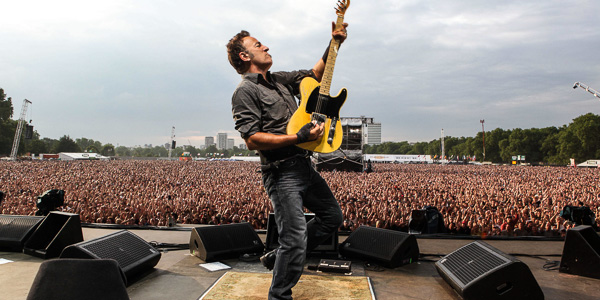 A rock and roll laureate. His songs are poignant, honest, at times angry in protest, and always delivered with awesome instrumentation and flawless and poetic lyricism.

The Boss – Bruce Springsteen – was born in Long Branch, New Jersey – 1949, which was where he first began to hone his skills as a musician. It was his home-town and his experiences growing up there that would set the emotional tone to much of his early work, and inspire Springsteen’s heartland rock and nostalgic lyrics, portraying the daily struggles of American life.

Starting out in humble beginnings it was John Hammond who signed Bruce to Columbia Records in 1972. Springteen’s music has earned him numerous awards, including 20 Grammy’s, two Golden Globes and an Academy Award as well as being inducted in to the Rock and Roll Hall of Fame in 1999. His work has spawned musical genres and inspired countless artists. Bruce Springsteen could almost be called a creed, more than just a man with a guitar but a way of life. As an artist he remains evergreen and undamaged, still effortlessly coaxing blues riffs out of his guitar with a nonchalance and charm that could only be qualities of a true genius.

Earlier this year Springsteen made somewhat of a comeback with his 2012 album, Wrecking Ball. Written to reflect the frustrations, struggles and triumphs of everyday people the album wholly harnesses the Boss’s experience of hammering out huge anthemic songs. The tracks are genuine, and affecting and deliver a message without being overwhelming or preachy. His Wrecking Ball Tour kicks off in December and any life long Bruce Springsteen fan would be remiss to pass up an opportunity to see the Boss in action.