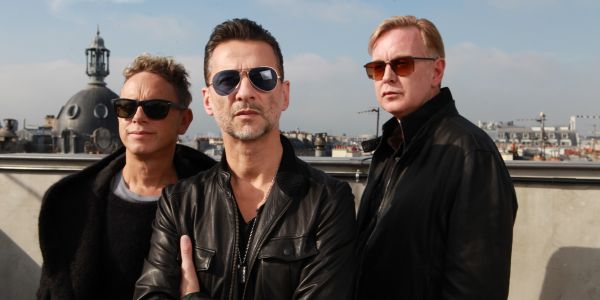 Depeche Mode is back. Dave Gahan, Martin Gore and Andy Fletcher announced “The Delta Machine Tour” in November and December 2013 and will hit Belfast, Glasgow, Leeds, Manchester, London and Belfast.

The legendary British electro band released their 13th studio album “Delta Machine” on 22 March 2013 and will support the album. The band announced their comeback last November in a mind-blowing press conference where they announced their World Tour which starts on May 7th in Tel Aviv and includes two gigs in London. Depeche Mode will tour the U.S., following the first leg of there massive European Tour and return for a second leg in November and December.

Depeche Mode signed a new record deal with Colombia Records last December and released “Heaven” – the first single of the “Delta Machine” album. Other singles on the album are “Secret to the End”, “Angel” and “My Little Universe.”

Fans around the world are excited to see one of the most successful electro bands. Tickets are on sale now!

Depeche Mode announced their new European Stadium Tour at a huge conference in Paris on October 23rd and the tour will definitely be a musical highlight of 2013.  Dave Gahan, Martin Gore and Andy Fletcher will play 34 concerts in 25 countries.

Formed in 1980 in the South of England, this new-romantic-rooted behemoth holds the accolade of being the most popular electronic group the world has ever known, the essential British techno-pop band. With an impressive career spanning over three decades, their achievements almost surpass success, and this multi-platinum selling band continues to be a global sensation to this day.

The last time, Depeche Mode toured with their highly successful Tour of the Universe in 2009/2010 where they played 142 concerts in total. However, the band is more than excited to be back. Dave Gahan said: “I’m thrilled about the new album and I’m very excited to get back on tour.” Touring next year to promote their 13th album, Depeche Mode remain a pop-infused force to reckoned with, and with their much anticipated 2013 release fast approaching, one can only hope that this will be yet another game changer for a band who continue to influence generation after generation of musicians and artists.

The Tour will kick off in Tel Aviv on May 7th and stop in the UK on May 28th and 29th in London at the O2 Arena. Other dates include Berlin’s Olympic Stadium, the Stade De France in Paris, Moscow’s Locomotive Stadium, and Rome’s Olympic Stadium. The European leg finishes on July 29th at Minsk Arena.