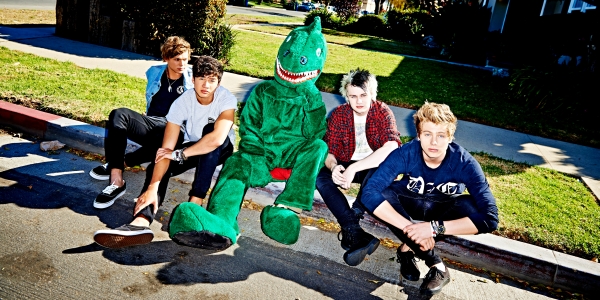 5 Seconds of Summer tour will kickoff on May 28th at the O2 in Dublin, followed by gigs in Belfast, Glasgow, Newcastle, Leeds, Birmingham, Cardiff, Manchester and London. The UK leg will be closed with two nights at the SSE Arena Wembley in London.

The Australian pop-rock band consists of Michael Clifford, Luke Hemmings, Calum Hood and Ashton Irwin. The four friends became Youtube sensations in 2012 after publishing a series of cover songs on the site and had their breakthrough after touring with One Direction in 2012. 5 Seconds of Summer will also support One Direction in 2014 on their “Where We Are Tour.”

The 5 Seconds of Summer debut single “Out of My Limit” was released in November 2012, followed by hit such as “She Looks So Perfect”, “Don’t Stop” and “Heartbreak Girl.” The self-titled studio album was finally released in June 2014.

5 Seconds of Summer tickets are going on sale on Friday, July 11th at 10:00am for all UK dates. Tickets range from £28.20 to £36.75 depending on location and venue. There is a strict limit of eight tickets per person and per card. It is recommends that children aged 14 and under MUST be accompanied by an adult aged 18 or above. Get your 5 Seconds of Summer tickets now as demand will be huge.