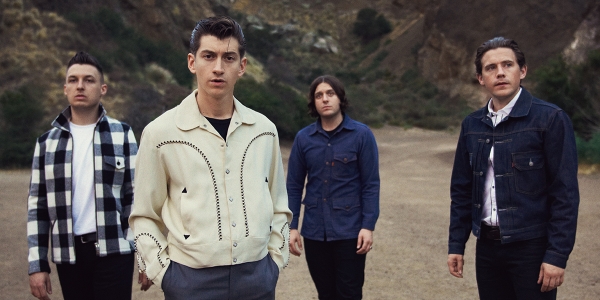 04.12.2013. After an incredible 2013, the Arctic Monkeys are aiming to build on their current success with a blockbuster couple of shows in 2014. The band has announced two sell out gigs at Finsbury Park in London, due to take place in May next year in the huge outdoor arena.

The band have some outstanding stats from this year, recording 157,329 sales of their new album AM in the first week alone; playing 76 gigs worldwide including headlining 13 festivals all over the world and are hoping to build on this success in the New Year. One of the highlights of the year has to be headlining the Pyramid Stage at Glastonbury Festival during the summer, performing in front of hundreds of thousands of people.

Their current success is largely down to the outstanding reception of their fifth studio album, AM, which came out early September. The Arctic Monkeys album debuted at number one in the UK charts and has made the band the first with an independent label to have five consecutive number one albums in the UK. One of the main features of the Arctic Monkey’s is that their style is constantly changing, although based on the reception of this current style, it is likely that future albums will follow a similar vein.

These two gigs are being built up to be the must see events of 2014, with tickets selling out fast and fans already getting excited, despite the five month wait for the shows. It seems Arctic Monkeys are not going to be running out of steam any time soon, and could go on to reach new heights in the near future.

04.07.2013. Arctic Monkeys, the four piece indie rock band from Sheffield, are currently on tour. They will be travelling around Europe and North America after headlining Glastonbury Festival and will be returning for the UK leg of the tour mid-October.

There are 8 dates confirmed in the UK, playing at the major cities such as Manchester, London, Glasgow and Cardiff. The tour and final date in the UK at the Motorpoint Arena in Sheffield coincide with the Arctic Monkeys’ upcoming album “AM”, which is due for release on 9th September.

This is the band’s fifth tour to date and is sure to be a good one with the musicians at the height of their powers having played in the opening ceremony of the London 2012 Olympics and as well as playing a variety of festivals across the world in their “AM Tour.”

Formed in 2002, the band has become world famous thanks to ever changing style and frontman Alex Turner’s Sheffield accent shining through in their songs. Between each album, Arctic Monkeys like to alter their style and go down different musical avenues that give something alternative to their fans whilst staying under the umbrella of the indie rock genre. The latest album “Suck It and See” is linked to British Rock of the 1960’s although based on the AM single “R U Mine” there are links to Drake and Lil Wayne in the lyric structure and takes the album in a slightly different direction again.

This tour is in high demand after their Glastonbury performance, so make sure you are ready to order your tickets before they get sold out.