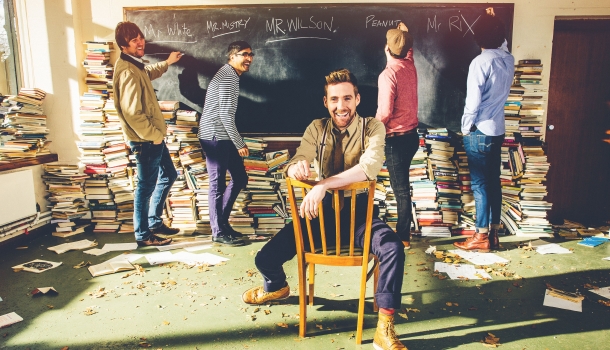 18.08.2014 – The Kaiser Chief announced their new 9-date UK Tour for early 2015. The tour will kick off at the Echo Arena in Liverpool on January 31st followed by concerts in Newcastle, Plymouth, Bournemouth, London and their hometown Leeds among others.

The Kaiser Chief released their fifth studio album Education, Education, Education & War on March 31st 2014 via Fiction Records with hit singles “My Life,” “Coming Home” and “Meanwhile Up in Heaven.” The new album is the first album featuring the new Kaiser Chiefs drummer, Vijay Mistry, after Nick Hodgson left the group in December 2012.

The rock band from Leeds already played a sting of festival this year. The Kaiser Chief already opened Glastonbury festival and headlined at T in The Park and the V Festival. The band will also join the Foo Fighters at the sold-out Invictus Games Closing Party on September 15th ahead of a US Tour and a European Tour in October.

The Kaiser Chief are certainly known for their hit single “Ruby” from their platinum album “Yours Truly, Angry Mob”, but Ricky Wilson, Andrew White, Simon Rix, Nick Baines and Vijay Mistry are known for their spectacular live performances.