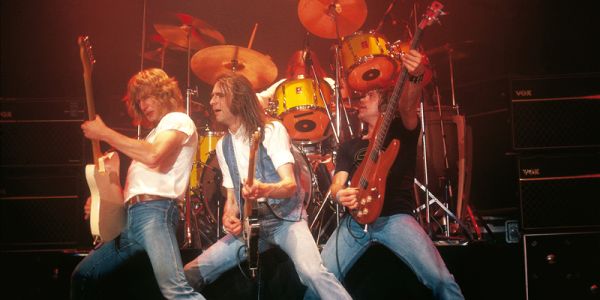 25.10.2013 Status Quo announced the last dates for their final four piece UK tour in 2014. The legendary rock band will start the UK and European leg of their tour in March and April 2014. Status Quo tickets are available now.

The rock band announced the last 8 dates for the “Frantic Tour” in spring 2014 which will be performed at several concerts in London, Wolverhampton, Manchester, and Glasgow. The original line-up featuring Francis Rossi, Rick Parfitt, Alan Lancaster and John Coghlan, reunited in March for a nationwide Tour. However, now they are coming back for the final gigs.

Guitarist Francis Rossi said: “Playing together again after all those years was amazing. It wasn’t perfect, I guess I always strive for that, but the chemistry was there and the crowds were just incredible. These new dates are an opportunity to kick it up a notch and to get the gang back together for one final blast.”

2013, however, was another great year for Status Quo. The band released their 30th studio album and was featured in a film – Bula Quo! The film was released in July 2013 and the band will also go on the 11 concert “Bula Quo!” Tour in December 2013.

Status Quo tickets for March and April 2014 went on-sale on October 18th at 9am.

For Manchester, Glasgow and Wolverhampton, standing tickets range between £44 to £54.75 and rear seated tickets £44.

07.12.2012 Status Quo fans listen in. The classic line up are reuniting for the first time in almost thirty years.
The ‘Frantic Four’ refers to Francis Rossi, Rick Parfitt, Alan Lancaster and John Coghlan all band members before the bands restructure during the 1970’s and 1980’s. Hits that will be performed during this reunion tour will include hits such as “Whatever you want” and “Rockin all over the world” as well as the only UK number one the band has had “Down Down.”

Status quo is an English Rock band. The band was formed in 1967, but the origins of the Quo can be traced back to 1962 before the band was officially known as Status Quo. Some of the bands successes include selling over 100 million albums worldwide, the Quo have recorded over 60 chart hits in the UK, more than any other rock group, and in 1991 received a Brit Award for outstanding contribution to music. In 2010, Francis Rossi and Rick Parfitt where awarded OBE’s for their services to music and there long standing support of the charity, The Prince’s Trust.

Status Quo are English rock legends, this tour promises to be something special, as a fan of rock it would be the ideal event for you and tickets are available now! Status Quo’s Frantic Four Tour will kick off in Manchester on March 6th and will stops in Glasgow,  Wolverhampton and London. However, the current Status Quo lineup are currently touring in Europe, with the show arriving in the UK for ten dates starting on December 6. Here is the full selection of tickets available: